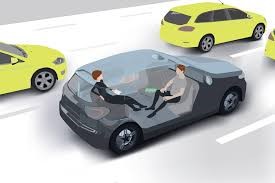 Are you still in control? The coming of the Driverless cars.

In the science fiction comic 2000AD they made a kind of prediction. The streets of Mega City one (a fictional vast city that incorporates the entire eastern seaboard of the United States) are so crowded that living space, any living space, is required to house the massive population numbers within it. One idea that was used is solar powered motorhomes that travelled the urban road system constantly. You could drive them or, as was the most used option a computerised driver took the thing around on auto-driver. This could last forever. It seems that now, with the advent of the driverless car we are a step closer to this as reality. Regardless of the sophistication of you car it is incredibly important that each year you contact a Gloucester MOT company like 123carandcommercial  to ensure that your car is roadworthy and legal. The driverless car has a lot to contend with. The road and its geography, hazards that might occur and us, the other drivers are just the tip of the iceberg. To help it the car’s use a series of sophisticated measures to allow it to function. Good old fashioned radar and sonar make up two along with GPS and the Lidar laser measurement system which all combine to give the car a degree of sensory information that is unparalleled compared to anything before it. The advantages for this are great. Removing the need for a human navigator means that anyone could theoretically get into the car and have it take them to their destination. This means that those unwilling or unable to drive need not be chained to public transport or other people to get them around. Environmentally, although it will mean more cars on the road if they are electric this will mitigate the cost. Also, there is an argument to say that the driverless car will get there quicker using less fuel.

However, there are critics of the system. They say that the downsides that need to be addressed are where the liability stands if, or rather when, there is an accident. The whole concept of car insurance will need, probably, to be rewritten and we won’t know the possible outcomes. Is it the car systems at fault? How will we know the car was at fault? There is even a suggestion that a hacker could take over the cars control and use it for unpleasant reasons. Some have even suggested that it is a new weapon of terrorism just waiting to be used.