Banger Van Racing. Who will survive? 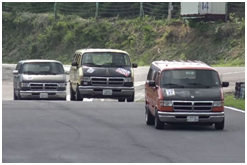 If the excitement of a procession of Formula one cars following each other around a track in some far flung part of the world doesn’t excite you then perhaps this will. Imagine a load of White van makes like Transit, LDV and Sprinter you name it going hell for leather against it other around an oval track then smashing them to bits in a demolition derby. The Man and Van Slough won’t be there. He’s too busy working but you can book him at https://www.uk-tdl.com/man-van.html if you need someone to get some stuff moved for you. There is nothing in the back of these racing vans I can assure you. When we say racing vans to be clear we’re not looking at some modded up speed machine. There are no spoilers to make the van more aerodynamic or diffusers to cut down on drag or lightning fast pit stops. There is no Bernie Ecclestone marching up and down the grid like he owns the place or did until it was bought from him.

What there is pure brutal racing in the raw. The format is simple, go as fast as you can and don’t worry about hitting the competition. In fact, take that as a tactic to win. Don’t worry about hair pins and braking distances either as all the tracks that have this type of racing are ovals. Mendip Raceway is a good example of that. It is an oval course with simple High banking for spectators to see. You cannot miss that action and what action there is. It’s the type of place where you can just rock up and get out the outdoor foldaway chairs, risk a burger or hotdog from one of the many vans on site and watch the action unfold. It’s probably impossible to know who is in the lead but hopefully the Race Marshals will have an idea and announce it over the crackling PA system.

If you’d like a more serious attempt at racing vans, then you’ll need to go to Japan. Bit of trip I know but over there they actual have a Formula based championship. The entrants have taken large Dodge Vans and cut them out so that all that is left is the pretty much the seat and engine. They then put in an enhanced roll cage to protect the driver. It dosent end there. They have added racing specification brakes and wheels to really show off the style. It sounds like an absolute blast.

So, if you’d like to see some really racing and over taking where if you hit another car it doesn’t explode the moment you touch it and you have to come into the pits. Get yourself along to a Van racing meet. You might even see a Robin Reliant Caravan race, but that’s another story.