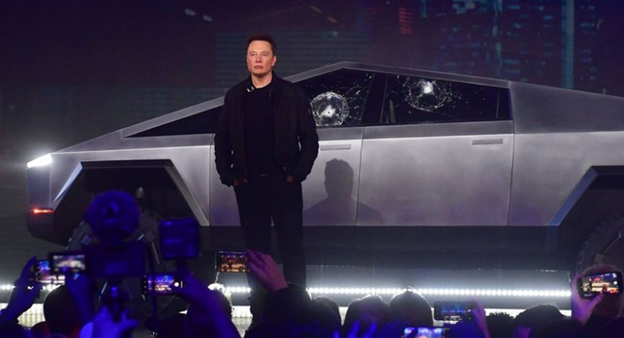 It’s been two months since the Tesla Cybertruck was unveiled in a supercharged ceremony attended by notable techpreneurs and electric vehicle (EV) enthusiasts. That it was an electric truck being unveiled made the event particularly interesting, especially to skeptical truck lovers.

During the launch, Musk was a little embarrassed when the “indestructible windows” of the truck, as they had been lauded to be, came shattering down during a demonstration. “Oh my f**** God; Well, maybe that was a little too hard,” Musk remarked.

That brief moment caused the company’s stocks to plummet 6% within hours, and remaining below pre-launch levels for about three weeks. But Musk, being who he is, capitalized on the moment to buy the confidence of the audience by letting them know that the Tesla team had their work cut out for them to make an improvement on the lapse.

The truck’s design divided the internet right in the middle. People either loved or hated it down right. It left no middle ground, or so it seemed.

Despite the outpouring of love-hate reactions from across the world, however, the Tesla Cybertruck remained wildly popular.

In his Elon Musk-endorsed review of the Cybertruck, Marques Brownlee said that the truck had “grown on” him significantly within 48 hours after its launch and that in the next two years – before it enters commercial production – it will “grow on” other people too.

I saw the window incident as a possible Tesla Cybertruck safety lapse, but over 100,000 pre-orders were placed immediately after the launch. And four to five days later, the figure had swollen to 250k preorders. It is highly likely that the figure has risen even further but that has not been disclosed.

1.   Does the Tesla Cybertruck even have Sufficient Crumple Zones?

The idea behind the ultra-hard 30X cold-rolled stainless steel used on the exterior of the Cybertruck and its unibody casting was to make it indestructible.

This detailed article about the Cybertruck’s polarizing design breaks down the reasons behind Musk’s choice of this unconventional pickup truck construction.

Who wouldn’t want a car that can smash through almost anything and come out unscathed?

But wait… there’s a problem.

The standard car design incorporates crumple zones to, as the name suggests, crumple under pressure to keep passengers safe. In a head-on collision, crumple zones absorb some of the energy from the impact to minimize its effect on the passenger compartment and its occupants, as illustrated in the figure below. Without these zones, the force generated by a crash would violently throw the passengers forward.

Even with a seatbelt on, the force would still be enough to cause injury due to its sheer magnitude.  The passengers would jerk forward so violently that despite being restricted by seatbelts, their internal organs would still face the risk of damage or injury. This line of argument finds support in this study, which shows that crumple zones have played a significant role in the decline of crash-related fatalities since their introduction.

Seemingly, in the event of a head-on collision involving the Cybertruck, it is likely that its passengers would sustain severe injuries due to the rigidity of the vehicle.

Tesla needs to prove to the consumer beyond any reasonable doubt that the truck will remain safe even without sufficient crumple zones. Otherwise, this glaring Tesla Cybertruck safety issue presents a serious risk of physical harm to passengers.

I should point out, though, that Tesla’s other models have been rated quite highly on safety by relevant bodies around the world.

The Tesla Model 3, for example, was the second plug-in EV (ever) to earn the Insurance Institute for Highway Safety’s (IIHS’) much sought-after Top Safety Pick+ award.

Is it possible, then, that Musk and his team completely forgot about this weighty matter in their latest tech installment?

Highly unlikely, but it is a matter worth ruminating over before you make that preorder.

2.   Does the Tesla Cybertruck have Rear-View Mirrors?

It can get really interesting trying to imagine how Musk thinks. Why would he unveil a car with no rear-view mirrors, yet he knows it is a requirement in the U.S.?

Perhaps the unveiling was rushed as suggested by some pundits, or the supposed errors and omissions were intentional to generate buzz.

Either way, the fact remains that rearview mirrors are a requirement and they weren’t on the Cybertruck during its public unveiling. An article on Thethings.com explains that covering the bed of the truck cuts off the rear view completely. To overcome this challenge, the truck relies on cameras that feed an always-on rear-view mirror screen on the dashboard.

This technology is yet to be legally sanctioned across the world, except in Japan. Therefore, automobiles that feature such cameras also have traditional rear-view mirrors.

So, it is a welcome addition to the Cybertruck, but actual rear-view mirrors are still needed.

The Cybertruck’s tow capabilities have been flaunted on multiple platforms since its unveiling. And to give credit where it is due, a 14,000-pound tow-capacity for an EV is quite impressive.

In fact, the Tesla Cybertruck appeared to effortlessly win a “tug-of-war” against the Ford F-150 (America’s most popular pickup truck) in a widely circulated video. I hear plans for a rematch are underway.

However, with a bulky trailer behind the truck, the rear-view cameras will be obstructed.

Here’s what I mean:

Clearly, if you intend to use this vehicle for this kind of activity, it goes without saying that you’ll need conventional rear-view mirrors.

Pundits envisage all around cameras like in all other Tesla models. This would mean having a few (possibly remote ones) on the trailer too, but the driver would have to toggle multiple views on the dedicated rear-view screen to access a specific view.

Such a possibility would simply worsen the horrible statistics associated with using a mobile phone while driving.

And to put this matter into clearer perspective, an article on The Verge reports that the Cybertruck prototype has been spotted on the streets of Los Angeles on several occasions. One particular evening, Musk took it on a trip to Nobu, a popular celebrity diner. On his way out, he ran over a sign meant to direct patrons out of the parking lot and took a wrong turn.

While this was possibly a random occurrence, it seems to speak to the difficulty of navigating the Cybertruck out of tight spaces. The driver’s field of view while sitting in the driving position must never be compromised if the truck is to meet necessary safety requirements. Tesla has some work to do on this front.

Otherwise, it will be awfully cumbersome and extremely dangerous to drive the Cybertruck in its current state, more so with a huge trailer behind it.

In fact, as it stands, the law doesn’t allow it. Tesla will have to make several adjustments to the Cybertruck to make it street legal. Since the truck does not even have windshield wipers, I don’t know how practical it will be to drive it in the rain.

3.   The sharp edges pose a high risk of injury to pedestrians

Another likely Tesla Cybertruck safety issue stems from its pointy edges and creases. The Cybertruck has been described as being like nothing else based on how it looks.

Why did the Tesla Design and Engineering teams make it the way they did?

Pundits have done a pretty good job of trying to break the design down for us, but they all agree that this is the most polarizing automobile design in history.

A couple of days after the truck’s launch, Musk explained via Twitter that ultra-hard 30X stainless steel is awfully hard to stamp; it would break a stamping press. That’s why the Cybertruck is so planar.

I don’t think any further explanation is necessary after this tweet.

Now, imagine striking a pedestrian or, worse still, being struck by the Tesla Cybertruck even at a low speed!

I most certainly wouldn’t want to be that pedestrian.

This is why modern automobile design wisdom holds that curvier is almost always better. The Cybertruck disrupted this long-standing tradition in a quest for uniqueness. However, doing so also raised some mostly unforeseen questions that haven’t been answered so far.

Consider the front of the Cybertruck for a moment. Clearly, it would be highly unforgiving to the legs of the unlucky pedestrian.

James Goodwin, chief of the Australasian New Car Assessment Program thinks that in its current form, the Tesla Cybertruck would be illegal in his country because it breaches current vulnerable road user safety requirements. He thinks the front is too harsh, and I bet most people agree.

And talking of crash-related injuries, does the truck even have sufficient airbags to protect the occupants during a collision? It is easy to assume it does, but no one has talked about this so far.

The Tesla Cybertruck safety issues explained in this article might sound light. However, they are of utmost importance.

Even though we were only shown the concept truck, I believe that Tesla is listening and gleaning opinions of concern from the public to improve the consumer trucks they will be releasing to the market. I hope that the Engineering team at Tesla will see this article and work on these concerns to make the truck safer for the user.

Because I am certain that out of the 250k plus pre-orders placed by enthusiasts of the Cybertruck in the days following its unveiling; at least some must be from outside the United States.

They could be from Canada, Europe, Australia, China or Japan.

The point is; the Cybertruck will have to meet international automobile safety standards before it causes a significant disruption in the pickup truck segment of the automobile market.

Going by the Tesla Cybertruck design, sexy looks are the least of concerns to those who will be driving it. Even though that is a given, safety is paramount and must never be overlooked.

So, as you prepare to pre-order, ask all the hard questions on the Cybertruck’s safety features to guarantee your safety when you finally receive first electric pickup truck.

George Ogutu is a budding Auto-Tech Writer, Blogger, and Editor with a knack for green tech, which is why electric vehicles make him tick. When not thinking about cars, he is all about environmental conservation. And when not thinking about the two, he enjoys playing with his two lovely boys. You can reach him here.