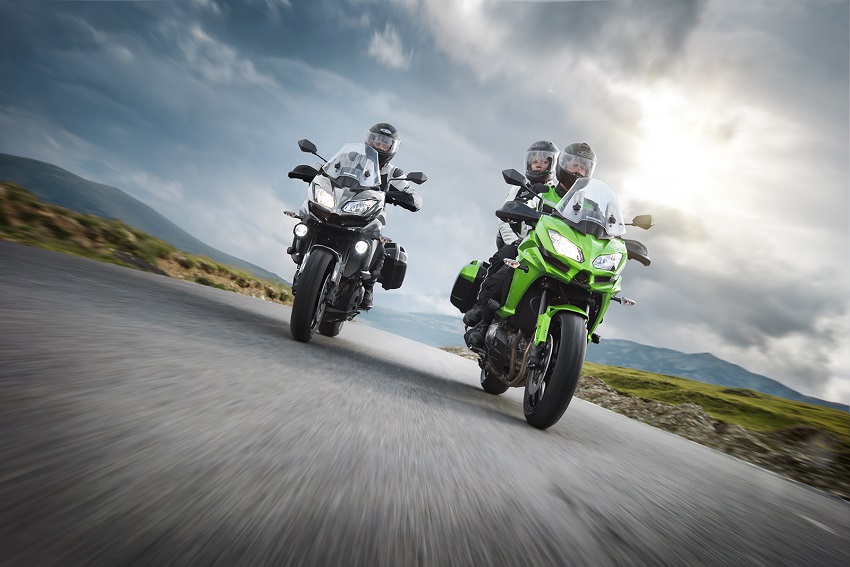 The Kawasaki brand starts the year in a big way and makes them offering one of its great and well-known models, but this time it does it in two versions of new Kawasaki Versys 1000. one for India and the other for Europe. Two motorcycles that transmit more than adventure, especially for that fanatic public of the brand that demands in each model technological innovations and avant-garde electronics. The new Kawasaki Versys 1000 2019 has a powerful and evolved engine of four cylinders and 1043 cubic centimeters liquid cooled, able to offer 118 horsepower at 9,000 revolutions per minute and generate 102 Nm of torque at 7,500 rpm. In addition, it adds a bulky fuel tank of 21 liters that allows a large number of autonomy, but that’s not all, this developed propeller also incorporates the advanced system of electronic valves of acceleration, it is able to promise a more accurate performance. The engineers of the renowned Kawasaki brand this time relied on the advanced KIBS system, and added high-quality Showa suspensions fully updated with gas preload system in the rear, thus increasing safety levels, at the same time adding two impressive discs of brakes one on the front anchored with radial calipers and pistons to a 17-inch rim and a second disc on the back fitted snugly with calipers and pistons to a second tire with the same inches. Kawasaki Following one of its greatest attractions such as technology. Presents its new line Versys with one of the most current and innovative techniques. It will give the pilot the ease of driving this amazing motorcycle, among them. We will find for example instrumentation that combines a speedometer and an LCD screen. The KIBS anti-lock braking system, KECS technology, KTRC traction control, and the KTRC cruise control system. But the saga does not end there. Because the new generation of Kawasaki Versys 1000 bikes also contains an adjustable windscreen. The LED lighting system and, finally, a 12 V power socket, luggage rack and central support.

Another feature that attracts a lot of attention is its image. It reflects small details that remind us a bit of the Ninja line but with greater style and dynamism. In addition to its aluminum structure is added a very comfortable and comfortable seat that provides the right ergonomics. And the right potion towards the handlebar. As we have already mentioned, Kawasaki Versys 1000 2019 will be available in two versions. And this will be according to the country you are in, the standard version will be offered in India.