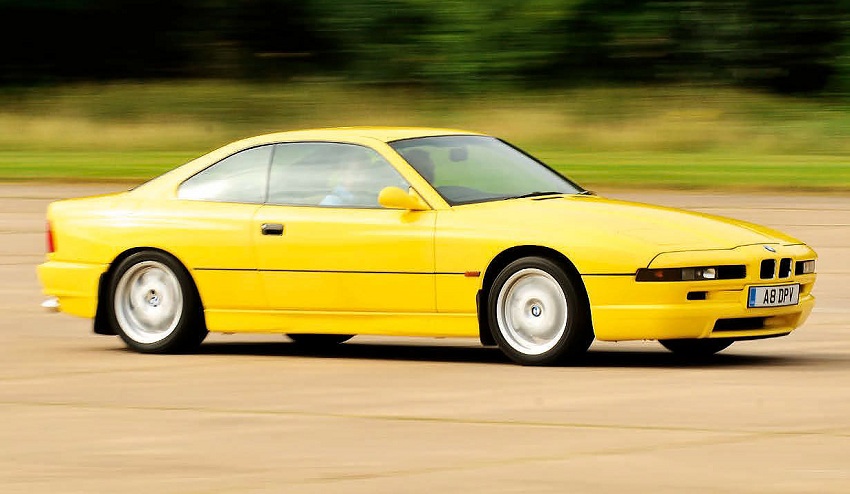 Posted at 15:34h in AUTOMOBILE by James 0 Comments
0 Likes

We talk about BMW 840Ci. The Yuppies were delighted to buy the twelve-cylinder engine, eager to demonstrate how well they were doing with their stock on the stock market. However, the real good is the eight, a much more balanced and logical version than its predecessor. Hardly lost 13 HP and, removing the electronic speed limiter, they ran almost the same.

The brand had decided to throw the house out the window with the series 8 . What was necessary to give Mercedes and its SL models at the top. In fact, it was already designed using CAD / CAM tools, something unheard of in 1986. The first BMW coupe with retractable headlights came out of the computer monitors.

BMW 840Ci, the predecessor of the 8 Series BMW got into a story that was never really clear and made 18 units of a hypothetical 830i, which did not see the light of the dealers because, someone will explain it to us one day, the 18 were dismantled shortly after. Perhaps the 218 HP of the ‘MotorCity’ of 3 liters seemed to them that they moved away too much of the philosophy of the sport’s flagship that wanted to transmit.

Here it appears, our BMW 840Ci (1992) with an engine of 3,982 ccs and 286 HP, much closer to the essence of the model. Note the sudden incursion of the ‘C ‘ in the car’s denomination. It is said that BMW was looking for it to unmark it from its representation saloons. And to finish the job BMW Motorsport got down to work with the M8; a cuckoo of care of which, we return to secrecy, dismantled the prototype and left his place for an equally bestial 850 CSI of 5.7 liters and 375 HP. Let’s finish this review of versions mentioning the 154 units produced by Alpina of its B12 whose maximum exponent was a CSI that reached 416 HP. Behind the wide door we have a pair of high-rise armchairs, with a careful leather upholstery, but, above all else, an endless string of buttons on either side. Is it possible to learn what each of them is worth? Well, giving him some patience, it seems so. It takes, but it is possible.

The dome that collects the clocks, stretches to the right, to finish wrapping the exits of the aeration, flying over the huge center console that leaves the eventual couple to accompany you to a romantic nothing distance. The finish is absolutely irreproachable even in the smallest details.

If we want to be strict with the model, the electric system failed them at times, but that as to all of its lineage. Start and the imperceptible sound of the engine, its automatic change and the smoothness with which it starts the march; they transmit to me something very different from what I expected from a ‘pure blood’ of the albiceleste propeller. I begin to think that, wrongly, I have climbed in one of the high-end saloons. I extract from all this, immediately, a first conclusion: the spirit of the series 6 is no longer present in this series 8. The Bavarian brand has taken a leap forward and appropriates full of a concept something orphan at the time: the Gran Turismo. On the contrary, the enjoyment of carrying a 635 CSI, for example, has also vanished. This BMW 840Ci does not convey the excitement of driving as its predecessor did, now that no one gets confused, it’s a rolling wonder. What I say is that it loses sensations in favor of extreme comfort. If you allow me the invention has been berlinizado.

It is enough to step on him with determination so that he responds to us instantly and, if he depends on it, he does not leave it until his driver (faithful guardian of his points), surrenders. The road capacity on the highway seems infinite and, outside of them, it translates into an unblemished behavior, although a bit lazy. This is due, I think, more to the weight of the whole, exceeding 2,200 Kg., Than the wheelbase, which remains at a reasonable 2.68 meters. In fact, seen from the side, the wheels are gathered towards the center and particularly those in front, are located in an obviously delayed position, leaving a huge forward cantilever. Continue Reading- All new BMW cars and SUVs in 2018: X4, Z4, X7 In any case, it should be noted that it was a sad ending. In its last year of manufacture, they were only made under the strict order of customers and barely exceeded three hundred units. This is how it ended with a beautiful couple that will once again win a quote as soon as we neglect it in the least.

Just give you an example: the BMW 507 was a sounded and resounding commercial failure for BMW (only 254 cars sold), but if they try to buy now one of those 254, prepare the portfolio, the credit card, the mortgage loan, the plan of pensions, the aliquot part of life insurance and the whole set of tradable stock options . With everything and with that; we’ll see if it reaches.